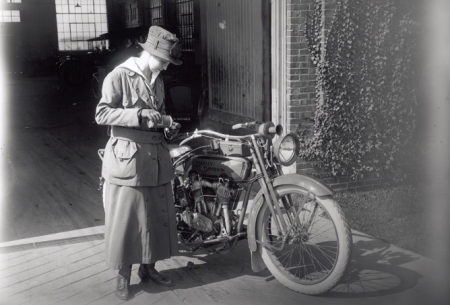 Lillian began riding in 1911 when she was 19 years old and ten years later, she reported that she had ridden approximately 56,000 miles. She took every opportunity to try to persuade women that they could ride and still retain their grace and femininity.

In articles she wrote for national trade magazines, The Harley-Davidson Dealer, and The Harley-Davidson Enthusiast, Lillian stressed two main ideas: (1) that a woman could ride a motorcycle and remain feminine; and (2) that the barrier to more women riding motorcycles was simply a lack of knowledge of the sport and the machine.

In her article, “Educational Work Needed: More Women Would Ride Motorcycles if They Understood the Machines” Lillian states, “I am fully convinced that the reason more women do not ride motorcycles is that they fail to grasp the recreation possibilities of the machine.” … “Altogether too many women regard the motorcycle as complicated and hard to handle, where as a matter of fact it is just the opposite. If they could be induced to make a trial trip under proper auspices they would at once gain confidence …” 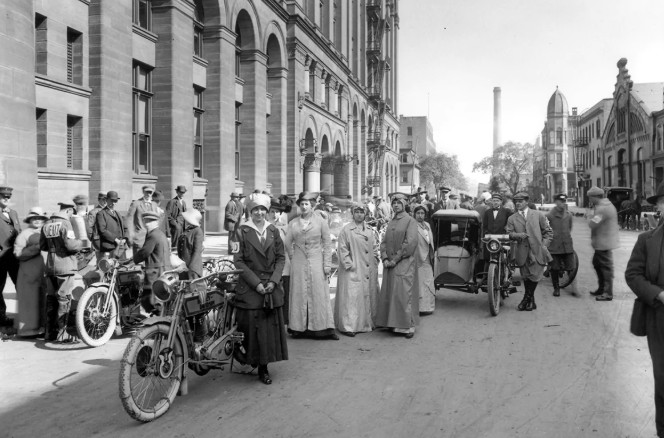 Lillian was one of the first members, and the only female rider, of the Milwaukee Motorcycle Club which formed in 1913. The club’s headquarters stood on 35th and Wells Streets, blocks from the Harley-Davidson factory. Lillian served as the official hostess for the club helping to plan club parties and celebrations.

Articles featuring Lillian touted her exploits as she was known for taking on challenges that most riders shied away from. In the October 1912 issue of The Harley-Davidson Dealer it was stated: “Miss Lillian Hauerwas of Milwaukee ... has achieved the enviable distinction of being the first girl to handle a motorcycle over the bad roads between Chicago and Milwaukee.”

In 1913, during the 322-mile Gypsy Tour, a ride from Milwaukee by way of Madison and Appleton, a few of the male riders were heard to say, “I wish I could ride like she does.” Her appetite for adventure and her love of country even led Lillian to inquire about becoming a motorcycle dispatch rider in Europe during World War I, although there is no record of her ever serving in that capacity.

Lillian also worked for the Motor Company for several years. Her exact start with the company is undocumented, however, the first official hint of Lillian’s employment with Harley-Davidson is a mention of her in an article that appeared in the Nov. 16, 1916 issue of Motor Cycle Illustrated as a member of the Harley-Davidson team at the 1916 National Motorcycle, Bicycle and Accessory Mart-Convention held in Chicago. In 1917, she was listed as a member of the office staff, and by 1921 she was listed as having responsibilities for sales records and statistics. According to 1930 and 1940 census records, Lillian went on to work as a stenographer and ultimately, she trained to be an x-ray technician. 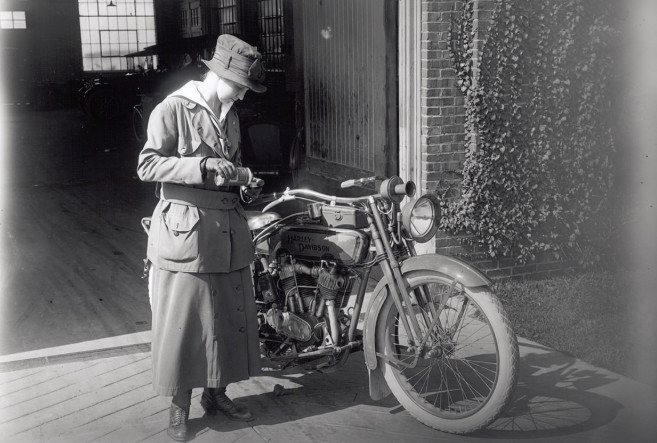